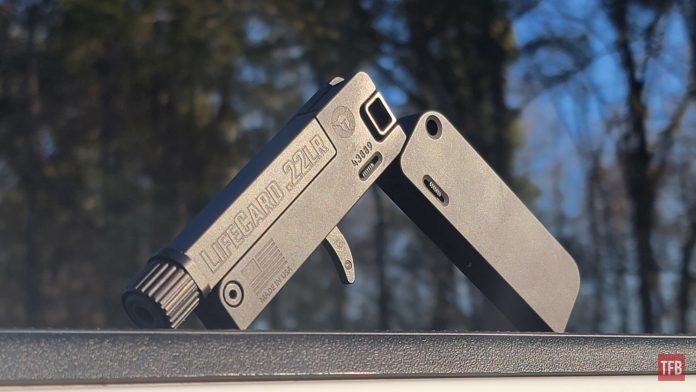 Hello everyone and welcome back to another edition of The Rimfire Report! This ongoing series is all about the rimfire firearm world and its many different types of guns, ammunition, and shooting sports. Last week we took a closer look at the inside of the SIG Sauer P322 which I personally believe is one of the better 22LR semi-auto pistols to come out in recent memory. Today we’re taking a look at the newest factory iteration of Trailblazer Firearms’ LifeCard – this time featuring a factory-threaded barrel. A few weeks ago at Triggrcon 2022, James Reeves and I had a chance to shoot this new threaded LifeCard and while it was impressive enough on the range, it was kind of hard to hear just how effectively this particular handgun was as a suppressor host. Today we’ll be taking a look at the new life card to see what has changed about it compared to the standard Life Card, and also see what kind of rimfire mischief we can get into with this neat little firearm.

The Rimfire Report: Fun with the New Threaded LifeCard

The new threaded LifeCard makes its return, this time with options for both a metal framed and a polymer-framed version that comes in at about $50 less. Like previous versions, the LifeCard can have its barrel assembly swapped out with a non-threaded version. Also similar to previous versions, the life card has the same manual of arms for its operation but this time incorporates a slightly larger compartment where you can store spare ammunition. You can fit three .22 Long Rifle or five .22 Short cartridges in here

The LifeCard in all its forms has a bunch of safety features that make it virtually impossible to detonate a live round while the pistol is folded. The pistol cannot be cocked while in the folded position and even if your fingers slip while cocking it, the firing pin cannot travel far enough to set off a round unless your finger is already on the trigger. The barrel assembly for the threaded LifeCard lacks the same trench that other life cards do. Not that it would make any difference as the barrel end of the assembly features a shoulder where your suppressor can butt up against. A number of years back fellow writer and King of Chenanagins Nick C had his personal life card threaded so that he could suppress it.

When I saw the LifeCard announced I immediately had plans to suppress it. I even talked with Aaron of Trailblazer Firearms to see if they had any plans to offer a threaded barrel version. At the time I spoke with him, they did not.

So I had my friend mill the steel barrel sleeve shorter and thread the inside of the outer barrel. Then he made a threaded adapter out of titanium 1/2×28 – 3/8×24.

The Trailblazer Firearms threaded LifeCard now features a 1/2×28 TPI threaded barrel and comes with a thread protector. The new monolithic threaded barrel also adds a little bit of extra rifling length which contributes to better bullet stability, and better clearance for the tilting barrel with or without a suppressor attached. The polymer-handled version of the threaded LifeCard costs $319 while the aluminum-framed version costs $369. You could have probably guessed it just from looking at it. The LifeCard isn’t very accurate and it’s largely due to how short it is, combined with the fact that it has virtually no sights save for a small, roughly 1/4″ trench section just behind the barrel. However, as stated earlier, the trench section is obscured by the flared end of the barrel assembly and if you’re running this thing suppressed (which you should be doing) this is a moot point anyway since any suppressor is going to completely obscure any chance you have at using the trench. However, I can safely say that the LifeCard is at least mechanically accurate at short distances. Adding a suppressor not only gives you the world’s smallest suppressor host, but also a tool with which to more accurately aim the pistol. The picture you see below is my best group of the day using my TiOn Inc Dragoon 450B suppressor, which, aside from looking completely ridiculous and silly, actually made for a great aiming assist tool. I was able to put 10 consecutive rounds into a small roughly 2″ group at five yards. Is that impressive? Not in any sense of the word but it at least gives you a small chance of hitting targets at longer distances. Using a variety of suppressors, I started taking shots at further and further distances and was finally able to land a couple of shots on a small 8″ plate at about 20 yards a number of times, as well as an 18″ steel target at about 50 yards. Again, not that impressive as I can do that all day long with just about any other handgun with proper sights but it demonstrates the kind of fun you can have with this type of firearm. Quiet Time is Fun Time with the Threaded Life CArd

The main reason to own one of these things, at least in my opinion, is to have fun with it. While the non-threaded LifeCard might have had a small case to make as a deep carry defensive weapon, the threaded version is honestly somewhat useless in that category unless you have a very small pillbox suppressor with wipes. In fact, the unsuppressed LifeCard is so loud that even .22 Short CB loads are loud enough to make your ears ring without hearing protection. The addition of any suppressor is an instant improvement and will bring a smile to virtually any firearms enthusiast because of just how quiet it is. I probably spent a good hour goofing around with the tiny suppressed pistol at the range and sharing it with a couple of other range members who wandered on by and every single one of them had a smile on their face and shock in their voice regarding just how quiet it was. Even James Reeves, well known for not really caring about any type of rimfire firearm, cracked a big smile after getting a chance to shoot the threaded LifeCard. Since the threaded LifeCard only has a 3″ barrel, even CCI Mini-Mags will not reach supersonic velocities and this means that just about any off-the-shelf rimfire ammunition you can get your hands on is fair game to use with the LifeCard and suppressor. Obviously, the CCI CB .22 Shorts were by far the quietest out of the ammunitions I tried but Federal American Eagle .22LR Suppressor, as well as CCI Quiet both, did very well in my tests. I’d rate every single one of those ammunitions hearing safe when using a suppressor.

The threaded LifeCard is a joy to shoot. I can’t really give you any other good reason to buy it than it being a really fun way to spend an afternoon with your friends while you’re at the range and want a break from all the noise but still keep shooting. The main reason I originally got into firearms as a kid and why it stuck with me until adulthood was because I found it fun and enjoyable and I think the LifeCard perfectly embodies this particular aspect of exercising our second amendment rights – it’s not practical by any means but it sure is fun. As always, I’d like to hear your guy’s thoughts on the new threaded LifeCard from Trailblazer Firearms. Would you ever pick one of these up? Could the design be improved with the addition of suppressor height sights of some sort or would that defeat the purpose of the overall size of the compact rimfire pistol? Let me know your thoughts down in the comments and we’ll see you back here next week for another edition of The Rimfire Report! “The humblest individual exerts some influence…”