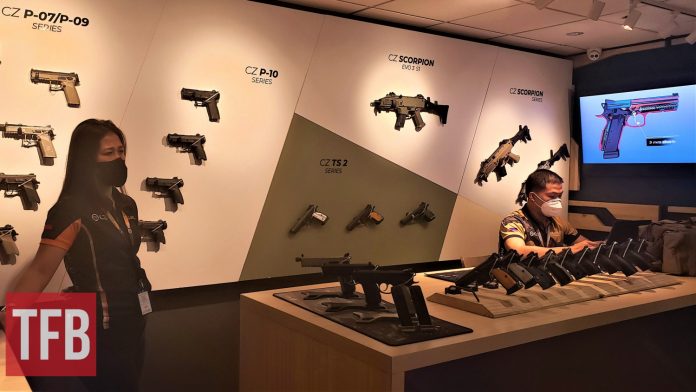 When people ask me about my hobbies, I am often hesitant to say “guns”, so my usual answer is “travel”. Frankly, it is both. And the more I travel, the more I understand that there are very few places in the world, outside of the US, that have an actual gun culture. More often than not, guns are a privilege available only to the rich and well-connected, and in very few places gun ownership is mainstream. But the Philippines are a good exception to that rule.

From the moment you leave the airport, you start to notice a surprising amount of guns and shooting-related stickers on cars. Not only gun ownership in the Philippines is mainstream, action shooting sports such as IPSC (USPSA) and IDPA are extremely popular, and Filipino shooters are very successful at international matches.

So what are the gun laws like in the Philippines? I first started to research that over 10 years ago, when I was looking for tactical training courses in South-East Asia. At that time, the gun laws in the Philippines were amazing. A civilian could buy an AR-15, there were no magazine capacity restrictions, the market was booming, and most of the modern semi-automatic rifles were available.

Even Philippine National Police force (PNP) officials were pretty reasonable in their interpretation of the law, saying in an official statement that: “Citizens can own as many assault rifles as they want”. It created an entire industry of shooting courses for foreigners. Thousands of Chinese tourists, who couldn’t access guns in their own country, were traveling to the Philippines to shoot guns and train.

Airsofter players, especially from Hong Kong, would come with their entire airsoft team for a chance to shoot some “real steel” guns and often demonstrated impressive weapon handling and teamwork skills they acquired during years of training with airsoft.

Some instructors were a little less legit and experienced, just looking to make a quick buck, and some were seasoned and experienced veterans. Overall, it gave a huge boost to the shooting industry – ranges were never empty, and ammo, both factory-made and reloaded, was in high demand. The Philippines became a sort of Second Amendment sanctuary for South-East Asia, a place where any gun enthusiast could enjoy their hobby, and freely participate in shooting competitions. Author at the range, learning basic vehicle tactics during the shooting class in the Philippines in 2012

Everything changed after 2016 when then-President Duterte decide to ban the sale of rifles to civilians, saying that it would reduce the number of armaments in the hands of communist rebels.

Now, the sale of semi-automatic rifles is only allowed to police officers and other Law Enforcement agencies, despite the fact that the primary gun legislation doesn’t explicitly state it.  Average citizens can still purchase shotguns, handguns, and pistol-caliber carbines.

Despite restrictions, the business is still booming, both in manufacturing and sales. On my recent trip to Manila, I decided to visit some gunshops to see how much the industry changed in the last 10 years since my last trip. There are two types of gunshops that I found. First, the usual “standalone” gun shop, which we are used to seeing almost anywhere, and the second type was basically a stall in what I would call a “gun shopping mall”. The most impressive “standalone” shop I’ve seen was the CZ single-brand flagship store. As far as I know, it is the only one in the world, build with support from the Česká Zbrojovka by a local CZ dealer. Situated in the middle of the modern and fancy Bonifacio Global City neighborhood, with upscale restaurants, nightclubs, and bars, this gunshop certainly looks the part. Main showroom of the CZ flagship store in Manila

Inside, there is an open display of CZ handguns and Scorpion Evo pistol caliber carbines. Thankfully, there is no restriction on the minimum barrel length in the Philippines, so the term “SBR” is unheard of. The only real difference compared to a gun shop in the US is the fact that all pistols are secured with zip ties, so the customers wouldn’t dry fire the guns without direct supervision.

Just like any other gunshop, the CZ flagship store sells accessories, grips, cleaning kits, and spare magazines. There is a nice lounge on the second floor for the VIP clients, and overall, the shop looks like it could be a regional headquarters for CZ in South-East Asia, not just a gun store. Pistol display in the CZ flagship store in Manila

But not all Philippine gun shops are slick and fancy. Welcome to Makati Cinema Square, one of the oldest shopping malls in Manila, located in the center of the city. When you enter the building, it looks just like any other shopping mall, with an endless array of cell phone shops, bridal dresses, children’s clothing, and food stalls.

But as you go down on the escalators, deeper and deeper into the underbelly of this enormous shopping center, you start hearing muffled shots coming from the lower levels. Not only this place has plenty of great gunshops, but it also has a shooting range. The shooting range belongs to Armscor, perhaps the most well-known modern Philippine firearms manufacturer. At this range/shop, you can shoot and also buy most of their handguns. And the prices are very tempting. Most 1911s here cost less than $500 and there is plenty of other stuff available – spare parts, countless magazines, mag extensions, and ammo.

The shooting range is right across the main counter, separated only by some glass, which is pretty normal for a gun shop. What is unusual is seeing such a store on the underground floor of a conventional shopping mall.

Once you exit the range, there are at least a dozen other gun stores with a selection that would complement many large gun stores in the US. There are also some Turkish 12 gauge shotguns that you see on every shelf of every gun store from Iraq to South Africa and Latin America. You can walk across those aisles for hours. There are big and small gun shops, and stores selling magazines, electronic hearing protection, and optical sights. After visiting a bunch of gun markets in Iraq and Pakistan, I expected the shelves to be filled with cheap Chinese knock-offs, but I couldn’t be more wrong.

Filipinos don’t just know their guns, they also know their gear. Everything was original, and therefore very pricey, so I ended up leaving the place empty-handed, but happy that shopping centers like that exist in the Philippines. I’ve seen my fair share of gun markets in the Middle East, but they were never as nice and welcoming as this place.

Despite restrictions and licensing requirements, the firearms industry in the Philippines keeps striving and providing jobs to thousands of Filipinos. Many government officials, including former president Benigno Aquino III, participate in shooting matches and collecting guns. So, hopefully, in the coming years, the citizens of the Philippines will not lose their gun rights and keep being the beacon of hope for firearms enthusiasts in South-East Asia.