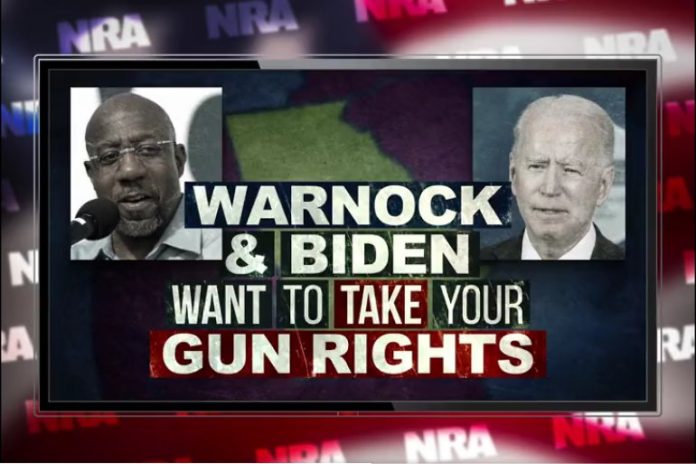 The left’s eternal bogeyman on gun rights, the National Rifle Association, had made a $1.5 million push to help get Hershel Walker over the finish line in the Georgia run-off election for US Senate. The former Heisman Trophy winner and 12-year NFL veteran gives Georgia residents a viable alternative to the so-called reverend, slumlord, and gun control supporter Raphael Warnock.

The election spending, above and beyond for the financially-strapped NRA, may make the difference in the very tight race. Obviously, Georgia gun owners have a lot riding on the race, as do gun owners across America.

🚨URGENT: All Georgia NRA members and gun owners must show up and vote on or before December 6! @ReverendWarnock will let @JoeBiden take away YOUR gun rights. Vote @HerschelWalker for U.S. Senate! pic.twitter.com/xy9RTFhCqq

The Reload has more, including how Everytown for Gun Safety has only dropped $1500 in the race on Warnock’s behalf…and how the NRA has a 17 for 21 record on candidates winning:

…The ad shows how much gun-rights advocates are invested in the final outcome of the midterms despite majority status already being out of reach for Senate Republicans. Though the race’s outcome will have little bearing on the prospects of new gun legislation clearing the chamber, an additional Democratic Senator would help bolster President Biden’s ability to make key political and judicial appointments.

According to the PAC’s latest FEC filings, the NRA Political Victory Fund devoted more than $1.5 million toward producing and placing the ad. That spending comes in addition to the nearly $100,000 the group has already spent on text messages and a postage campaign supporting Walker’s candidacy since a runoff election was declared.

Thus far, the major gun-control groups have not matched the NRA’s spending. The latest FEC filings for Everytown for Gun Safety’s Super PAC show it has only spent $1500 for phone calls in support of incumbent Senator Raphael Warnock (D.). Neither Brady PAC nor Giffords PAC have submitted updated filings since the general election. None of the gun-control groups’ websites refer to any new spending or advertising campaigns ahead of the final Senate race…

Overall, the NRA has seen 17 of its 21 endorsed Senate candidates secure electoral victory thus far, according to a review by The Reload.

Obviously gun owners need to not only get out the vote, but also harvest ballots of their fellow Republicans to win this race where early voting (and vote harvesting) has already begun.