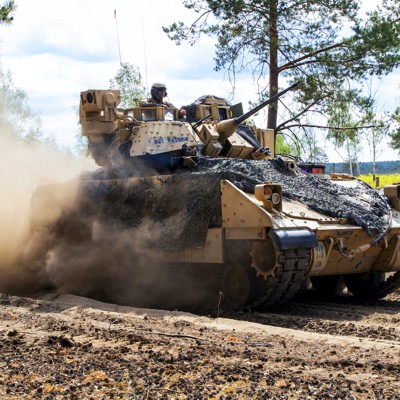 Military tactics used in the Ukraine war—including the heavy use of kamikaze drones—are influencing the way BAE Systems is designing a new armored fighting vehicle for the Army.

The company, which is one of five competing to replace the four-decade-old Bradley Fighting Vehicle, shared details Wednesday about its proposal, which includes the option to add more armor to protect soldiers from attacks from above.

“For a long time, … as we’re trying to meet weight targets and great mobility for vehicles, we’ve taken the armor off the top of vehicles,” Jim Miller, vice president of business development at BAE Systems, said during a call with reporters.

Militaries around the world have scrapped heavy armor from the tops of armored vehicles, he said, “which has made those vehicles potentially at risk because of this new top attack thing we’re seeing everywhere, and most recently in Ukraine.”

“We are looking at, and we’re going to offer, the ability to do modular armor protection, so additional armor that would go on the top of the vehicle and allow for protection,” he said.

Anti-tank weapons like the American-made Javelin or the Ukrainian-made Stugna-P climb above the target and then drop down to strike from above where armor is the weakest. Russia says its Kornet anti-tank weapon has a similar capability.

BAE Systems has also designed its vehicle so that high-energy lasers and other types of counter-drone technology could be installed later if the Army wants it.

“What we’re doing is making sure that the modular hooks are in place so that we can support that when it comes,” Miller said.

Bids to build prototypes to replace the Bradley for what the Army calls the Optionally Manned Fighting Vehicle, or OMFV, were due on Nov. 1. The Army is expected to choose three winners next year and then evaluate the prototypes before selecting a single winner in 2027.

BAE, which built the Bradley, is offering a newly designed vehicle. The company announced Wednesday that its teammates include Elbit Systems of America, Curtiss-Wright, and QinetiQ. The team said the vehicle is being designed so that the Army can easily install new weapons or technology as needed in the future.

“Given the Army’s requirements for growth, and for the future, you just can’t constrain it with an old design,” Miller said.

Aside from having more technologically advanced weapons and sensors, all five bidders are proposing hybrid-electric vehicles, which will allow soldiers to drive or conduct reconnaissance using only batteries, making it more difficult for an enemy to spot since they will not be emitting heat or generating noise.

“We’re offering mobility at the objective levels for this vehicle, and so beyond the base requirement,” Miller said. “We think [that] series hybrid electric drive gives you the drive, the mobility, the burst speed, the torque, to be able to operate anywhere that you choose to operate.”

“The onboard power that we have will be able to run lasers that are much bigger than the lasers we see being used for counter-UAS right now,” Miller said.

US defense chief vows to help Taiwan defend itself