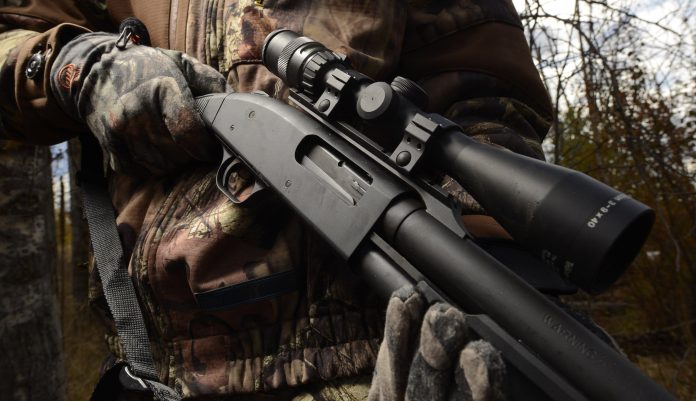 It’s no backhanded compliment to call the Mossberg 500 the greatest cheap shotgun ever made. The company’s intention from the beginning was to undercut the competition with an affordable, reliable pump gun. Since the Model 500 was introduced in 1961, it has been the first shotgun of countless shooters, and the only shotgun of many more. Designed to be a hunting gun, the Model 500 has taken every kind of game you can shoot with a shotgun. It’s been to war, and served as a law enforcement and home defense gun, too.

Sixty-one years later, it’s readily apparent that Mossberg succeeded in its aim with the 500. The gun is a triumph of mass production. Of its slide-action contemporaries in 1961, the 500 is the last gun standing.  The Winchester Model 12 is long gone, as it’s machined, hand-fitted, and far too expensive to produce. The Ithaca 37 survives only as a high-end pump made in boutique numbers. The 500’s toughest competitor, the Remington 870 Express, had to be made cheaper and cheaper to compete with the 500, until it didn’t work anymore, and it had to be replaced by a better-finished FieldMaster that doesn’t try to compete in price with the 500.

For years, the most common letter I received as shotguns editor of Field & Stream was “Should I buy a Model 500 or an 870 Express?”   And, for many years, I would talk about how both were good guns, but I’d come down on the side of the 870. Then, as I watched 870s decline in the early 2000s, my answer changed, and I started looking at the humble 500 through new eyes. They are always slick right out of the box. They work. They are lightweight, which is a very good trait in an upland or turkey gun, and they are available in a configuration for practically any purpose.

The History of the Mossberg 500

Founded in 1919 by Swedish immigrant Oscar Mossberg (hence the yellow cross on a field of blue Mossberg logo),  and his sons Iver and Harold, O.F. Mossberg started out producing a four-shot break-open pistol called the Brownie and eventually became known primarily as a maker of affordable .22 rimfire rifles as well as a few bolt-action shotguns. During WWII, the company produced thousands of .22s as training rifles for the U.S. military. In 1955 the company introduced the very odd Model 200 pump shotgun, which featured a one-piece, rifle-like stock, a detachable magazine, and a metal slide that moved up and down the forend.

Realizing that the company needed a more conventional pump gun if it were to compete with Remington, Ithaca, and Winchester, Mossberg turned to its in-house design genius, Carl Benson and his team of engineers, to make a new pump. Benson drew some of his inspiration from the legendarily-smooth Remington Model 31, the very pump that the 870 replaced in 1950. To set the gun apart from the competition, he put a sliding safety on top of the receiver, in the same place the safety is found on a break-action gun, and in easy reach of right- and left-handed shooters alike. That safety allowed Mossberg to advertise its new gun as “the only 12-gauge with the feature that every shooter wants.” Mossberg also offered the gun in what they called “combos” and we would call “bundles” today. In 1961, the first year of Model 500 production, you could buy a 12-gauge for $74.95 ($79.95 if you wanted a 3-inch chamber or a C-LECT-CHOKE adjustable choke) and you could buy the gun with two barrels to make it more versatile. Mossberg would lean hard into the whole versatility thing as the years went on, marketing the gun as a “shooting system.”

Aside from the extra barrels and the top safety, one other important feature made the gun stand out: unlike all its competitors, the Model 500 had an aluminum receiver. Not only did that make the gun light, but it also made it less expensive to produce. However, in 1961, real guns had steel frames, or so people thought. Mossberg’s aluminum parts and low price caused many to dismiss it as a cheap gun. Now that aluminum frames are common, we know that Mossberg’s engineers weren’t cheap, they were forward-thinking.

The gun was such a success for Mossberg that it began phasing out all its other firearm and non-firearm products (Mossberg bicycles,  and its line of Pedersen high-end guns and golf clubs, for instance) when the company aquired its first C-N-C machine in the late 70s. Alan Mossberg, the third-generation Mossberg, made the decision as soon as he saw the machine at work turning out Model 500 receivers. “This is the future of manufacturing,” he thought, and, realizing the company couldn’t afford to re-tool all its production lines, he decided to focus on shotguns. “The best business of all of our businesses is the pump-action shotgun, so let’s be the world’s biggest producer of pump-action shotguns.” With 11,000,000 made, it has surpassed the Remington 870. The success of the 500 allowed Mossberg to move back into rifles like the Patriot and pistols, but the 500 remains the company’s best-known gun.

Why the Mossberg 500 is Such a Hit

From the beginning, Mossberg promoted the gun as versatile, and as the years passed, it offered a number of firsts. It was the first gun to offer a production rifled, cantilever-mount slug barrel, and also a “Dual Comb” stock insert that allowed you to raise the comb for scope use. There was even an in-line muzzleloader barrel you could add. The 500 has been made in many configurations for special purposes from trap to turkeys to tactical, and it has been made in 12-, 16- (briefly) 20-gauge and .410. And while the 500 comes in many sizes and flavors, all the guns share the same slick, proven action.

The military version of the 500 is the 590, which has features specifically requested by the armed forces. It has a metal trigger guard in place of the 500’s plastic part, and a heavier barrel requested by the Navy so it can’t be damaged if a hatch slams shut on it. And, while the 500 has a nut attached to the barrel ring to hold the gun to the mag tube and frame, the military version has a standard magazine cap to make it easier to access the magazine tube for cleaning. Otherwise, the 500 and the 590 are the same gun. Back in the 1970s, it was the only gun to pass the military’s MilSpec 3443 3000-round buckshot torture test. Model 500s are tough.

I will confess here I no longer own a Model 500. I do hunt turkeys with its big brother, the 835, a very similar gun, with more or less the same action but chambered with an over-bored barrel to shoot 3 ½-inch shells. Not surprisingly, it was always-innovative Mossberg that partnered with Federal to make the first 3 ½-inch 12-gauge and, it’s equally not surprising that the gun was a spin-off of the very successful Model 500.

Read Next: The 50 Best Shotguns of All Time

One of the many good reasons to own a Model 500 is that its success as a military and LE gun means there are tons of aftermarket parts made for it. If you’re one of the people who complains about the top safety being sticky, for $25 and ten minutes of your time you can change it out for one of the many tactical safeties available. I did with my 835 (most 500 and 835 aftermarket parts fit both guns) and found a nifty low-profile Aimpoint mount for it. There is almost any special-purpose part you’d care to find made for a Mossberg pump.

The main reason to own a Model 500, though, is that it works. In a time of ever-cheaper products that don’t always do what they are supposed to do, the Model 500 does, at a price anyone can afford. Whether you want it as your main gun or your bottom-of-the-boat gun, it will shoot smoothly and reliably when you need it to, just as it’s done since 1961.

Bowhunters Will be Thrilled with APEX’s new Single-Caliper Kingpin

5 Ways to Purify and Filter Water without a Filter

How Much Does Bad Software Cost DOD? Lawmakers Want to Know