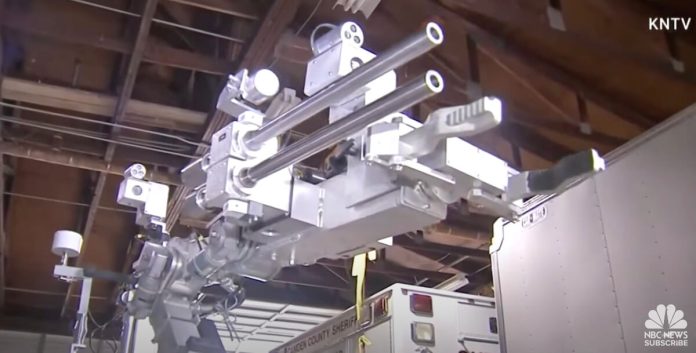 The 1980s sci-fi satire, RoboCop, seems to be coming to life as the San Francisco Police Department recently announced they will allow robots to use deadly force in dangerous situations to protect officers and the public.

The use of deadly force by these robots, they said, must meet specific criteria to be justified.

The San Francisco Board of Supervisors voted for the use of deadly force as long as there is an imminent threat to police officers or the public and all other options have been exhausted. In 2016, a robot was used to kill a suspect in a Dallas, TX shooting that took the lives of five officers.

Under this policy, SFPD is authorized to use these robots to carry out deadly force in extremely limited situations when risk to loss of life to members of the public or officers is imminent and outweighs any other force option available. 2/5

The incident in Dallas sparked public debate as to whether it is ethical to use robots for deadly force as part of law enforcement procedures.

Jay Stanley, a senior policy analyst with the ACLU, had some criticisms of the use of robots with lethal capabilities.

“Our biggest concern is that armed robots will be over-used,” Stanley said in a statement on the ACLU website.

“As robots allow deadly force to be applied more easily and with less risk to police officers, and as they get cheaper and more commonplace, there is a risk that they will turn into yet another avenue for abusive behavior by some in law enforcement,” he continued.

While Stanley and the ACLU have concerns about the Dallas incident, retired assistant chief of police and recognized SWAT expert, Steve Ijames, believes this option was the Dallas Police Department’s only shot at protecting the public based on the fact the DPD couldn’t get eyes on the suspect.

“I think you’ll learn as this plays out that this person was secreted in a location that they couldn’t see him,” Ijames said in a 2016 interview with Wired.

“If they could see him, they just would have shot him with a rifle, no question,” he added. “And looking at the physical location—the concrete and the chance of ricochet—they probably didn’t want a lot of bullets flying around. They were probably trying to limit their fire as best they could.”

Despite the hyperbole expressed by many who oppose this policy, I believe it lays out reasonable restrictions on the use of robots, and I appreciate the work Rules Committee Chair @AaronPeskin and SFPD did to come to an agreement on this important issue. 5/5

Today, the debate is playing out on social media with many reacting for and against the use of deadly robots in law enforcement.

What are your thoughts? Are you ready for killer robots?

About the author:
Dante Graves Dante is a movie and comic book junkie who loves a good explosion. His passion for politics and journalism led him here. Dante’s only aim is to be truthful and factual with his reporting.