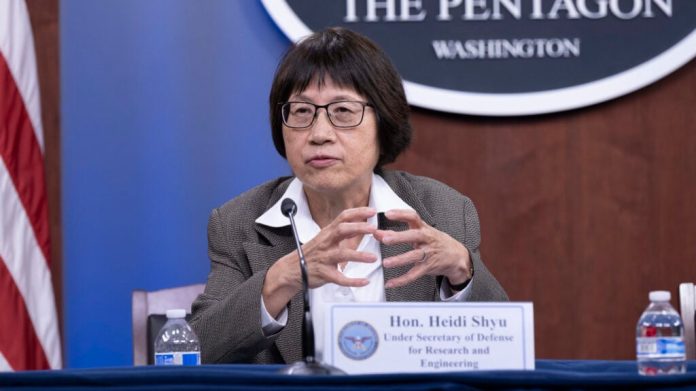 Under Secretary of Defense for Research and Engineering Heidi Shyu speaks during a press briefing at the Pentagon, Washington, D.C., June 27, 2022. (DoD photo by Lisa Ferdinando)

REAGAN NATIONAL DEFENSE FORUM — The Pentagon hopes to catapult defense technology start ups from development into production through a new office that will link companies with sources of private capital, the Pentagon’s top civilian said today.

“Our partners in the private sector have flagged a consistent problem,” Defense Secretary Lloyd Austin said in a speech at the Reagan National Defense Forum. “Even when they can see a way to deliver a promising technology to a military customer, securing the necessary capital to scale is hard — and sometimes impossible. So we’ve listened, and we’ve acted.”

The Strategic Capital Office (SCO), announced Dec. 1, is meant to help provide long term funds aimed at bridging the so-called “valley of death” — the sometimes yearslong gap between when a technology is first developed and tested to the time where funds are available in the budget to produce and field it.

Surrounded by defense company executives — including those from tech startups and commercial firms angling for a larger share of Pentagon contracts  — Austin acknowledged that Defense Department is sometimes slow in adapting new technology from the commercial sector. “But we are determined to change the way that the Pentagon does business and to create a true innovation ecosystem,” he said.

The new office is geared toward helping the Pentagon field emerging tech, particularly in fields like advanced materials, next-generation biotechnologies and quantum science, the department stated in a news release. It’s also meant to keep startups engaged with the Pentagon and prevent China or Russia from gaining access to new US capabilities or market.

SCO, which will be overseen by Heidi Shyu, undersecretary of defense for research and engineering, will begin standing up in 90 days, eventually building out a staff off about 20 people, Shyu said. It could begin striking deals with companies early next year.

“We’re working with all the folks who have capital — could be private capital, could be whoever —  to provide the investment. We’re not setting aside a billion dollars of our own pot of money to fund this. That’s not the intent of this,” she told reporters on the sidelines of the forum.

For instance, the office will be working with the Small Business Administration, which manages a pool of private capital that can be spread among different industries, Shyu said.

“They have a mechanism that’s already been established with many different departments,” she said. “The department of Energy already utilizes this. They funded Tesla…in terms of providing them guaranteed loans. And Tesla actually paid back within three years.”

In order to generate wider buy in from Congress, the Defense Department needs to ensure duplicate functions performed by other Pentagon offices like the Defense Innovation Unit, said Rep. Rob Wittman, R-Va.

“Let’s make sure that they’re not conflicting with each other, not taking away from one another,” he told Shyu during a panel on innovation.

“That’s certainly not my intention … at all,” Shyu said

What Happened at the Davos World Economic Forum Summit of 2022? –