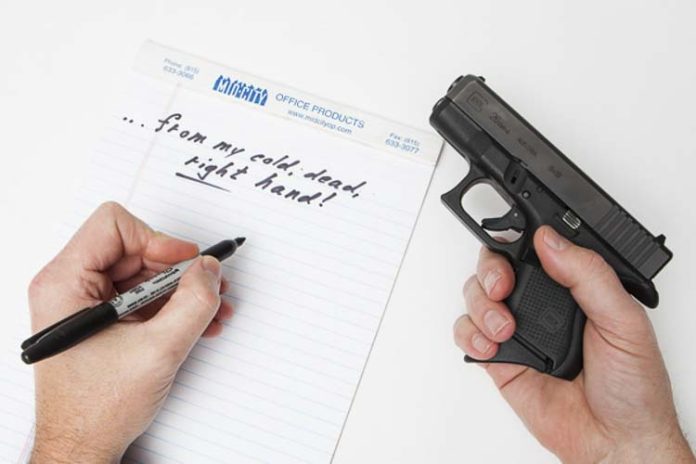 While we’re well past Left Handers Day, if you’re a southpaw like me, you know the burdens we bear. Besides being smarter and better looking than everyone else, we’re constantly struggling to use tools designed for the other 90% of the population, from measuring cups to musical instruments. Everything is built backwards.

Of course I have a lefty softball mitt and golf clubs. But back when I bought my first Windows computer, I made the decision to set the mouse up on the right side of the keyboard like everyone else. I knew I could change the settings to work with the left hand, but then what happens when I need to use someone else’s computer, or when someone else wants to use mine? That decision to become a right-handed mouse operator has served me well over the years.

When I got my first BB gun as a youngster, I learned to shoot it right-handed. I’m not sure why. Maybe it’s just the way my Dad taught me. I’m glad he did, because when I decided to buy my first pistol some forty years later, it was obvious that I would have many more choices if I wasn’t limited to “ambidextrous” models.

Now, even though I write, swing a hammer and wield a chef’s knife left-handed, pulling the trigger on a firearm with my right index finger feels just as natural. If you think that would be difficult for a lefty, consider that there are about a hundred switch-hitters in Major League Baseball, many of whom hit better left-handed.

Also remember that with a long gun, your left hand grips the forestock and is primarily responsible for stabilizing and aiming the gun, which require fine motor skills.

The practical implications of this strategy go far beyond just having more choices in pistols and holsters (not to mention semi-auto rifles, shotguns with a cross-bolt safety, etc.). In a home defense situation, my wife and I have more-or-less equal proficiency with whatever tools are available.

We both train with the same guns, even though we both have our preferences. Think about this: when the thugs come a-callin’, wouldn’t you rather have your dominant hand free to dial 911, point a flashlight or hold a child? Finally, during fun times at the range, I can shoot anyone’s gun, and they can shoot mine.

If you’ve been shooting left-handed for many years, you’ve already learned to deal with the inconveniences that go along with it. And if you aren’t inclined to switch gears at this point, I understand. But if you’re a lefty who’s new to the world of firearms, I highly recommend that you learn to shoot right-handed from day one. In the end, you’ll be as grateful to me as I am to my mother.