After a shocking decision in late November approved the use of deadly force using robots already in use by law enforcement, the San Francisco Board of Supervisors has decided to halt the program, which was met by “fierce pushback and warnings about the militarization and automation of policing,” according to NBC News.

The board voted unanimously to ban the use of robots for deadly force but will still allow discussion on the topic for future review, which could allow robots to regain a license to kill in certain situations.

According to reports, the San Francisco force did not intend to give robots any sort of firearms; however, officials did seek to gain the ability to strap explosives to the robots, in addition to “contact, incapacitate or disorient dangerous or armed suspects” if there were life-threatening possibilities. Police argued that their 12 active robots, if equipped with lethal force, “would only be used in extreme circumstances to save or prevent further loss of innocent lives.”

Oakland authorities were more explicit with their gun-toting robot desires, seeking approval to attach shotguns to machines, but settled for pepper spray after receiving backlash.

Oakland and San Francisco were the only California jurisdictions to seek the use of deadly force through robots after a new law in the state passed that requires police departments to keep inventory of weapons and equipment such as grenades, armored vehicles, and battering rams while seeking explicit approval in order to use them.

San Francisco City Hall saw a crowd of protesters opposed to the prior approval, which included three of the city’s supervisors. Supervisor Dean Preston participated, having previously called the decision a vote to give police new ways to kill people.

“The people of San Francisco have spoken loud and clear: There is no place for killer police robots in our city,” said Preston.

“We should be working on ways to decrease the use of force by local law enforcement, not giving them new tools to kill people,” he added. 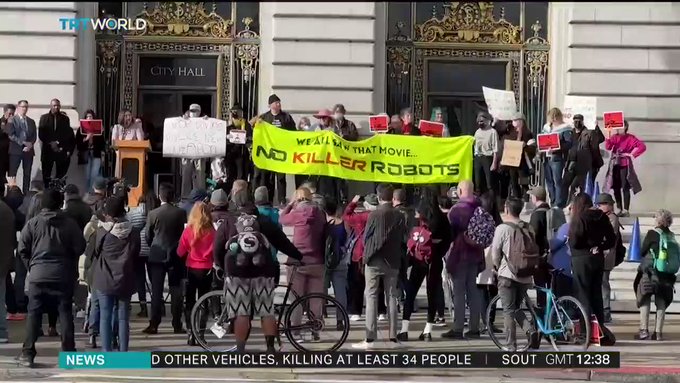 Outcry also came from civil rights representatives such as the Lawyers’ Committee for Civil Rights of the San Francisco Bay area, who called it a “dystopian future.”

“We debate whether the police may use robots to execute citizens without a trial, jury, or judge,” said Tifanei Moyer on behalf of the organization.

Outspoken actor Mark Ruffalo was one of many personalities with opinions on the matter, reacting to the news of the program’s halt by seemingly blaming the situation on Elon Musk, stating “Elon’s “future” is upon us — “the infinite economy, robots in service of man.”

Thank God! We couldn’t figure out how to deal with homelessness in our richest cities, but we’ve been able to solve the killer robot question. They can’t kill one person but can kill a lot of people. Elon’s “future” is upon us—“the infinite economy,” robots in service of man. 💥 https://t.co/qpjxdgNCsh

How the Army wants to build its ‘wolf pack’ drone waves