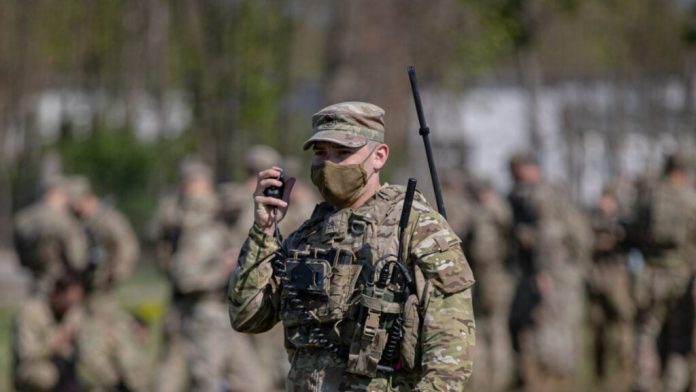 A U.S. Army paratrooper assigned to the 173rd Airborne Brigade tests his PRC-163 radio to ensure that communications are ready before conducting an airborne assault into Bulgaria during exercise Swift Response 21 in Papa Air Base, Hungary, May 8, 2021. (U.S. Army photo by Spc. Giovanny Lopez)​

NASHVILLE — The Army is moving away from its old buying processes and rethinking how it buys technologies, starting with procurement of more than 350,000 tactical radios under a new “as-a-service” pilot, the service’s undersecretary said on Wednesday.

The Army needs “to experiment with different buying models, especially for our capabilities in which technology trends do not support the serial process of defining a requirement, entering a development phase and then pursuing a continuous fielding process of that exact same version of a capability over a long period of time,” Gabe Camarillo said at the Army Technical Exchange meeting in Nashville, TN. “That, my friends, is almost exactly how we initially pursued the purchase and procurement and development of our tactical radios in the past.”

The Army has over 350,000 radios across the service, an amount that’s “simply too large to upgrade at an adequate pace,” and its current inventory is driven by hardware and the limitations of the industrial base, Camarillo said.

“So the purchasing model that we currently use, which is buying and maintaining a large quantity of radios, may not be as flexible or frankly as affordable as it needs to be in order for us to solve the long-term challenge of making sure the Army can fight and win the nation’s wars,” he continued.

To that point, the Army will pursue an “as-a-service” pilot for its radios in the fourth quarter of this fiscal year with the aim of driving down costs, improving access to innovation and helping to “change the paradigm” the service currently faces in terms of long-term sustainment. Under the model, the Army would contract with a vendor to provide a minimal number of radios for training, centrally store or lease radios for operations and upgrade software as required.

The as-a-service model might require the Army to take a broader look at the processes it uses to fund and field equipment. But the potential cost savings, ability to tailor radio packages and the flexibility to provide upgrades over time is a “compelling” reason to experiment with the model, Camarillo added.

The service’s tactical radio program office will also be releasing two requests for information to industry on Friday. The first will conduct market research on the as-a-service model, and the second will ask vendors what they can provide in terms of their own investments and innovation to meet the Army’s requirement for a low-cost, single-channel, secure unclassified radio.

“This will complement our efforts to determine what echelon we need unclassified radios, in what quantities, and will also help us understand creative and innovative ways in which we can account for our security risks and also improve the cost curve over a long period of time,” Camarillo said.