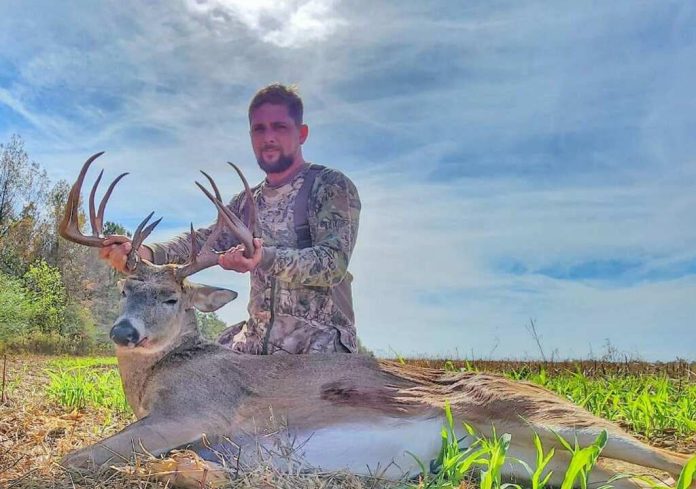 A Georgia hunter shot the biggest deer of his life on November 11, but while he was en route to the butcher, he was shocked to realize that it didn’t have any male sex organs. “I was talking to my taxidermist on the phone, and I told him that the tarsal glands were white and didn’t have any odor at all,” Justin Buchanan of Reynolds, Georgia told F&S. “He said, ‘You didn’t shoot a doe with antlers did you?’”

Buchanan stopped the truck and got out to have another look at his trophy—a 14-point whopper that would eventually green score 159.5 B&C. “I pulled over and popped the tailgate, and I’m like: Dude, this is a doe,” he said. The deer, which Buchanan took with a 300-yard shot from a box blind on the edge of a gas line cut, looked like a buck in every way except for its reproductive anatomy. There was nothing there, according to Buchanan.

Buchanan’s taxidermist, Jeremy Williams of Williams Whitetail Taxidermy in Reynolds, was just as shocked as he was. “I think that might be the biggest deer that’s ever come out of this county, let alone an antlered doe of that size,” Williams said. “It blew my mind.”

Williams searched the deer thoroughly while skinning and field dressing it, but no sign of male sex organs ever turned up. He and Buchanan were left to believe that it had to be an antlered doe.

Charlies Killmaster, a whitetail deer biologist with the Georgia Department of Natural Resources says that antlered does are extremely rare. “Throughout my entire career, I’ve probably only come across two or three true antlered does,” Killmaster told F&S. “They usually have very small antlers that tend to stay in velvet and never fully complete the growth cycle.”

He suspects that Buchanan’s giant-racked deer was actually a hermaphrodite. “My guess is, there are probably testicles in there somewhere, and they just didn’t find them,” he said. “They could have overlooked them if they were encased in fat or something like that. But this deer’s anatomy wasn’t properly developed. From the photo I saw, it did look like it had female external organs.”

According to Killmaster, a deer wouldn’t be able to produce a rack of the caliber that Buchanan’s sported without sufficient levels of testosterone. “Antler growth and antler hardening and the shedding of velvet is all a hormonal-driven process,” Killmaster said. “It takes a pretty substantial amount of testosterone to not only grow a full set of antlers but also to mineralize and harden them and then shed the velvet.”

If Buchanan’s deer was a hermaphrodite, Killmaster says it’s the biggest one he’s ever seen come out of the state of Georgia. “I hear about three or four of these hermaphrodites being killed in Georgia every single year,” he said. “I’ve seen one that scored about 120 but never anything like this.”

Buchanan said he’ll have the deer shoulder-mounted. Williams, who plans to have the work done by February, is going to display the mount in an upcoming taxidermy contest. “It’s definitely the best deer that I’ve ever shot, and the fact that I got it while hunting with my nephew made it even more special,” Buchanan said. “It’s going to be hard to top that one.”