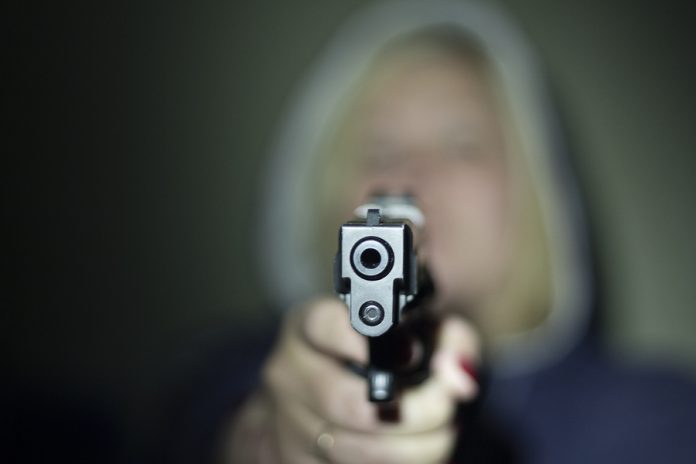 The worst domestic violence I have ever seen involved a woman whose husband was out on bond for blinding their son with a baseball bat. He had struck the child so viciously he lost his eyesight. The woman had a temporary protection order against her husband, and a court date for another hearing. She never made the second hearing.

I was a rookie cop when I first met her. I was sent to an unknown call for the police. As I and my partner were walking up the stairs to the woman’s second-floor apartment, we noticed the coppery smell of blood. The door to her apartment was wide open. She was laying on the living room floor, clad only in a pair of blood-soaked panties. She looked as if she’d been dipped in a vat of blood. Unfortunately, her husband was no longer there.

Her apartment was awash in blood. It looked like one of Dante’s circles of hell. Her husband had slashed her more than 30 times on her arms, torso, breasts, neck and face. Her wounds were not deep, thankfully. She wasn’t bleeding profusely; it was more of an oozing since she had nearly bled out. She was fading in and out of consciousness.

For the only time during my law enforcement career, I gave the dying declaration. It’s a legal tool of sorts, which allows the victim’s last words to be used as evidence in court even after they’re dead. It starts with: “You know you’re about to die, who did this.”

She told me her husband had attacked her, and she provided his name. I really wish I could have found him that night. I might have saved taxpayer dollars. Fortunately, he was picked up a few days later on a felony warrant and held without bond.

To everyone’s surprise, the woman survived the attack. A series of painful reconstructive surgeries managed to conceal some of the scars on her face and neck. We spoke briefly after one of the court hearings for her husband. She told me she was undergoing counseling and learning how to defend herself with a handgun.

Former New York City mayor Michael Bloomberg’s anti-gun activists at The Trace recently cited the tragic tale of Sahmya Garcia, a Philadelphia woman who was shot and killed by her boyfriend last month just a couple days after she obtained a protection order against him. Garcia’s boyfriend shot her 10 times just blocks from a police substation. Her family blamed the police.

“They absolutely failed to protect her,” Garcia’s mom told The Philadelphia Inquirer.

Although the Philadelphia Police Department may have had a moral responsibility to protect their citizens from harm, no department has a legal responsibility. The U.S. Supreme Court has ruled no such duty exists.

In the 2005 case Castle Rock v. Gonzales, the Justices found Colorado police were not responsible for failing to protect a woman and her three children from her husband. After she obtained a restraining order, he kidnapped and murdered their three children.

Other courts have agreed. The 11th Circuit Court of Appeals upheld a lower court decision that said police were not responsible for the 2018 mass shooting at Marjorie Stoneman Douglas High School in Parkland, Florida.

When it comes to our personal safety, we are our own first responders. Besides, when seconds count, police will be there in minutes.

It’s difficult to understand why anyone would abuse a woman – and the overwhelming majority of domestic violence victims are women. It’s also hard to know what would stop an abuser. For some, a protection order is all that’s needed. They fear arrest, loss of income and the accompanying public humiliation. For other abusers, a protection order is just a piece of paper.

Not only has the entire gun ban industry ignored the obvious solution to domestic violence, they have purposefully made it more difficult for potential victims to defend themselves, because they believe a piece of paper will somehow magically stop all abuse before it starts.

I have worked hundreds of domestic violence cases, but not one involved a female who had a defensive firearm – not a single one. It’s almost as though an armed, trained woman is immune from domestic abuse.

Unfortunately, because of their zeal for waiting periods, complex and costly concealed-carry permitting processes and demonization of everything with a firing pin, the gun ban industry has made it difficult for women to obtain the one thing that’s guaranteed to stop an abuser in his tracks – a defensive firearm.

Nowadays, in the 25 states that have not passed constitutional carry, there’s no quick way for a potential victim to legally purchase and carry a defensive firearm. In some states it can take months to obtain a concealed carry permit, thanks to the anti-gunners and their supporters who hold political office.

This lack of immediacy has cost lives. If it’s allowed to continue, more women will be beaten and killed. This is one fact the gun ban industry never wants to talk about.

To be clear, their misguided and ill-informed efforts are killing women.