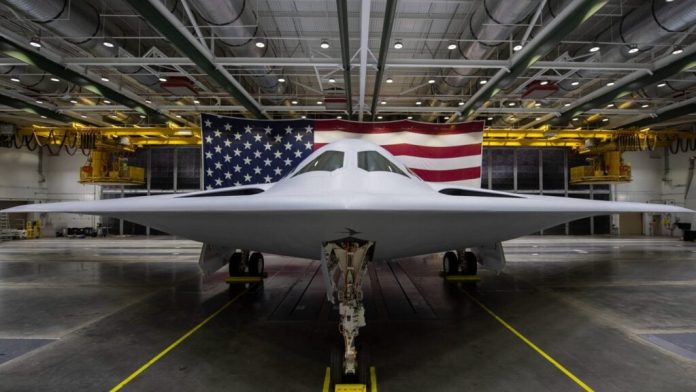 Unveiled Dec. 2, 2022, the B-21 Raider will be a dual-capable, penetrating-strike stealth bomber capable of delivering both conventional and nuclear munitions. The B-21 will form the backbone of the future Air Force bomber force consisting of B-21s and B-52s. (U.S. Air Force photo)

The dramatic reveal of the B-21 Raider long-range stealth bomber left a few dropped jaws and plenty more open questions about the bomber’s exact capability — secrets jealously guarded by the military. In the op-ed below, IISS’s Ben Ho argues that whatever the military plans to use the bomber for, it should also consider a novel role for the high-tech airframe: fighting at sea.

In recent years, much ink has been spilled over China’s touted anti-access/area-denial (A2/AD) thicket and how best the United States and its allies could circumvent it during a Western Pacific conflict. The more popular of these counter-A2/AD measures include extending the striking reach of the US aircraft-carrier force through tanker drones, as well as potentially introducing more capable missiles for the Navy’s surface and submarine force.

But another concept that has been under the radar, but which seems to be gaining traction, is the use of Air Force long-range bombers in an anti-surface warfare (ASuW) or “ship-killing” role.

Various military thinkers, including retired US Air Force general and Breaking Defense contributor David Deptula as well as this author, have advocated deploying strategic bombers like the B-1 Lancer armed with anti-ship weapons against the People’s Liberation Army Navy (PLAN). And with the Air Force’s next-generation B-21 Raider slated to come on board towards the end of this decade, there has understandably been some chatter over a possible ASuW remit for the new Northrop Grumman aircraft. Repurposing the B-1s could be helpful, but the B-21 could be a true game changer if its reported capabilities are anything to go by.

One key operational advantage “heavies” like the B-1 and B-21 have over other weapon-delivery assets (especially tactical combat aircraft) would be their much larger payloads. The mainstay US naval strike fighter, the F/A-18E/F Super Hornet, can deploy with a handful of Long-Range Anti-Ship Missiles (LRASMs) a few hundred miles out from a carrier. Tellingly, the LRASM loadout of a single bomber equates that of several Super Hornets. Indeed, the B-1 can carry 24 such weapons, while the B-2 Spirit stealth bomber could potentially have a capacity of 16 LRASMs [PDF]. And over intercontinental distances too.

Given its smaller size, the B-21 is believed to have a payload only between half [PDF] and three-quarters that of the B-2. (Little reliable information currently exists for the aircraft.) Nevertheless, that should still give the B-21 a decent notional standoff ASuW capability of eight to 12 LRASMs. Therefore, even a relatively small complement of half a dozen Raiders (which would combine to around 50 stand-off anti-ship weapons) should give pause to Chinese naval planners.

Exploiting the B-21’s high level of low-observability – it is over 30 years ahead of the B-2 in this regard – and deploying it for the penetrating-strike (as opposed to standoff) role would enable the new bomber to tote a larger payload and pose a deadlier threat to enemy fleets. After all, while standoff weapons are integral to defeating an adversary like China, they are less effective for various operational reasons against mobile targets such as ships out at sea. In the penetrating-strike role, the B-21 would be able to, with a considerable degree of survivability, fly deep into contested airspace with direct-attack munitions that are shorter-range and smaller (but cheaper and in greater numbers). Indeed, when the B-2 gets phased out from the 2030s, the B-21 might be “the only bomber capable of… surviving in the expanding Chinese air defense bubble,” as one study puts it [PDF].

Keeping in mind that the Raider’s payload is estimated to be at least half that of the Spirit, the former could notionally be armed with nearly a hundred of the ASuW-capable Small Diameter Bombs or SDBs (the B-2 can carry 192 of such weapons). A detachment of SDB-armed B-21s roving in the Western Pacific will no doubt leave a big question mark in the minds of enemy naval commanders. To be sure, the SDB weighs only 250 pounds and seems a tad lightweight compared to the LRASM’s 1,000 lb warhead. However, the Small Diameter Bomb can bring about ‘mission kills’ by inflicting topside damage on PLAN ships, and deployed en masse, it has a good chance of overwhelming Chinese defenses. Not to mention that the SDB, while short-ranged compared to the LRASM, still has a meaningful striking reach of 40 nautical miles.

Besides the B-21’s weapon loadout, its non-kinetic capabilities could also give it a potent naval role. One analyst is right on the mark when he contends that the aircraft’s “abilities to gather, process, and share information at exceptionally long-ranges and inside defended airspace, including over naval task groups” must be recognized. Indeed, the B-21’s role as a “quarterback” is arguably just as essential as its “door-kicker” one. After it has breached the A2/AD barrier, the Raider could assume this battle-management role by “directing play” and orchestrating follow-on anti-ship missions, which non-stealthy Air Force assets or even platforms from other services would undertake.

Earlier this month, the Center for Strategic and International Studies (CSIS) published a study [PDF] based on wargaming a Chinese invasion of Taiwan. The report is clearly in the “bombers-for-ASuW” camp as it maintains that “[b]ombers capable of launching standoff, anti-ship ordnance offer the fastest way to defeat the invasion with the least amount of US losses.” To this end, CSIS recommends that “all bombers can carry the full range of munitions,” adding that “[g]iven the LRASM’s centrality in destroying Chinese surface forces, it needs to be employable from all aircraft for maximum flexibility” (The missile is currently compatible only with the B-1 and F/A-18E/F).

Going forward, Washington would do well to give the B-21 a definitive ASuW portfolio when it becomes operational. By 2027, there should be some 20 B-21s in service, and apportioning just a fraction of them, say four or five aircraft, for maritime strike would undoubtedly send a robust message to Beijing around the tail-end period of the ominous “Davidson window.”

The process of making this Raider detachment a true ship-killer would, however, not be a straightforward task. After all, there is no precedent of stealth bombers (the B-2 is not coded for ASuW) being utilized for maritime strike with standoff munitions, let alone with direct-attack ones. Moreover, the Air Force severely lacks institutional memory in the field: Although its B-1s are training for ASuW, the service (in its Army Air Forces incarnation) last attacked/sunk a ship during World War Two.

Nevertheless, the lessons learned and best practices from operating the B-1/LRASM combination should guide the Air Force if it recognizes the maritime role for the B-21. And the reality is that while penetrating a modern A2/AD bubble for a naval mission is new territory requiring new concepts being developed in real time, a lack of precedent cannot be a reason to avoid developing a strategy for how it would work.

As the overall size of the B-21 fleet increases, the service should consider standing up a B-21 squadron dedicated to the ship-killing business. Ideally, elements from this unit would deploy regularly with the Indo-Pacific Bomber Task Force (or its future iterations) while clearly signalling its raison d’etre. Such a measure should contribute profoundly to America deterring, and if necessary, help defeat Chinese aggression in its maritime environs.

Ben Ho is an associate editor at the International Institute of Strategic Studies where he is based in the think-tank’s Singapore office.