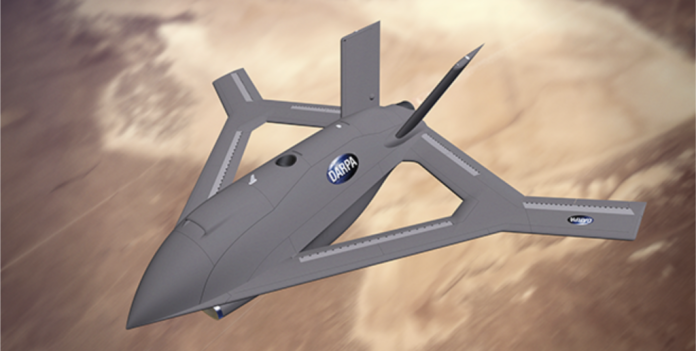 DARPA’s CRANE program is aimed at developing a test aircraft for demonstrating technologies for active control of air flow that can improve aerodynamics and performance. (DARPA)

The “X plane” is part of the Control of Revolutionary Aircraft with Novel Effectors (CRANE) program, the goal of which is to pioneer the use of active flow control (AFC) techniques, the Defense Advanced Research Program Agency (DARPA) explained in its award announcement Tuesday.

Today’s aircraft normally use passive systems, such as chevrons and aircraft shape, to manage air flow and aerodynamic performance. AFC, on the other hand, regulates the aircraft’s aerodynamic flow field through mechanical actuators, or by ejection or suction systems built into on various parts — all under the control of an operator.

The first, preliminary design phase of the CRANE program resulted in “an innovative testbed aircraft” that used AFC “to generate control forces in a wind tunnel test,” the announcement elaborated.

Two contractors were awarded the Phase 1 contracts in August 2021: Aurora Flight Services, a subsidiary of Boeing based in Herndon, VA, that specializes in uncrewed aerial vehicles, and Lockheed Martin.

At the same time, DARPA extended its Phase 0 “conceptual design” contract with Georgia Tech Research Corporation “to allow further refinement of these tools for transition to relevant military and government partners.” It also partnered with Britain’s Royal Air Force to contract BAE Systems for a separate a Phase 0 concept, which BAE tested last July.

The new Phase 2 contract to Aurora “will focus on detailed design and development of flight software and controls, culminating in a critical design review of an X-plane demonstrator that can fly without traditional moving flight controls on the exterior of the wings and tail.”

The contract, worth slightly more than $42,000, also includes a Phase 3 option, for flight of a 7,000-pound X-plane to test out solutions to key technical challenges.

“Unique features of the demonstrator aircraft will include modular wing configurations that enable future integration of advanced technologies for flight testing either by DARPA or potential transition partners,” DARPA’s release noted.

“With a modular wing section and modular AFC effectors, the CRANE X-plane has the potential to live on as a national test asset long after the CRANE program has concluded,” CRANE Program Manager Richard Wlezien said.

This is What ‘Commonly Owned’ Means: Americans Have Over 24 Million Modern Sporting Rifles