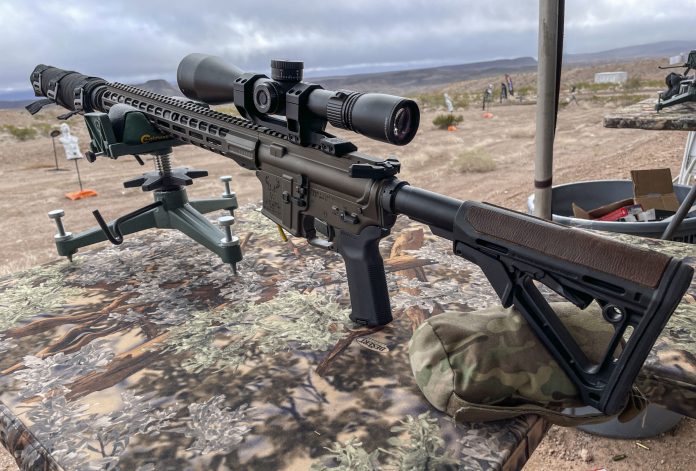 Stag’s making the Pursuit semi-auto rifles in a range of colors with both left and right eject models. MSRPs range from $1599 to $2249 depending on caliber, barrel length and other options. We also got a look at a pre-production version of Stag’s new Pursuit modular bolt gun. Stag’s new Pursuit bolt gun is intended to be light weight and customizable. It’s centered around an Aero Precision-built Remington 700 action with detachable barrels. All you’ll need is a Zermatt wrench and a vice to swap out barrels. The receiver will be made of magnesium of light weight and the bolt can be disassembled without tools for easy cleaning. The bolt has a 60 degree throw and the knob is RPR compatible, so there are dozens of aftermarket options to choose from. The Pursuit bolt gun’s stock has plenty of QD cups, an adjustable cheek piece and spacers for easy length of pull and comb height adjustment. The stock and forend can be quickly and easily detached with a crossbolt takedown pins making it simple reconfigure and customize the rifle (think skeletonized options). That will also make it easy to carry and transport in smaller Pelican cases. The forend has lots of MLOK slots space in a removable plate along with a “toothbrush” extension for attaching a bipod via Pic rail, Arca Swiss plate, whatever.

Stag expects the Pursuit bolt rifle to hit stores in the third quarter. They aren’t sure about exact pricing yet, but tell us that it will be well under $2000.

23 Overlooked Survival Foods You Need To Add To Your Pantry