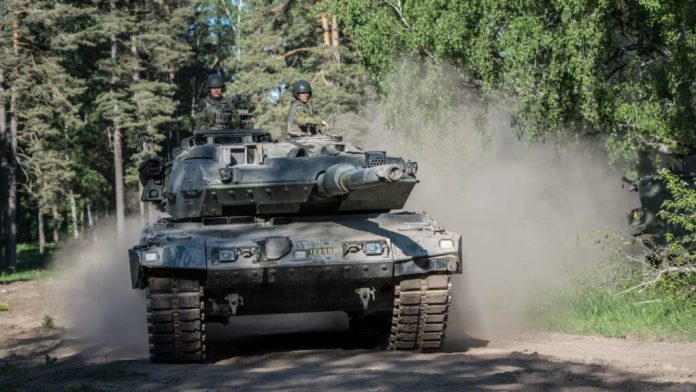 LONDON — Sweden has not reached a decision on supplying Ukraine with Leopard 2 main battle tanks, but remains open to supporting Kyiv “with all types of capabilities,” according to a senior Swedish military official.

Speaking at the International Armoured Vehicles conference in London, the official said that there have been frequent discussions around Swedish army capabilities and how various European countries could aid Ukraine in repelling a spring offensive by Russia or mounting one of their own.

“We are, politically, open to support with all types of capabilities but tanks have not yet been on the plate,” said the Swedish representative on the condition of anonymity in line with conference rules. “We have made a substantial contribution [to Ukraine] and of course that gives challenges but also opportunities” for progressing with Swedish defense modernization.

“We… cannot give away stuff without refilling our own equipment reserves,” the official said. “Everyone needs to understand Russia has been there for at least 500 years. They will be there in the long run.”

Sweden operates 120 of the NATO standard Leopard 2 tanks, according to figures from the International Institute for Strategic Studies. Stockholm’s apparent hesitancy adds to that of Berlin, which legally controls the export of tanks used by friendly nations.

At the other end of the scale, Poland has vowed to send a company of the tanks unilaterally, instead of an international coalition, a move which Germany “would not stand in the way” of, according to German foreign minister Annalena Baerbock.

Despite not committing to a Leopard 2 supply plan yet, the invasion of Ukraine has had a profound impact on Sweden’s defense posture, with it deciding to apply for NATO membership and pledging to meet the alliance’s 2 percent GDP spending target by 2026, almost doubling national defense spending in the process. Stockholm also wants to ramp up conscription after reintroducing the policy in 2017 to deter Russian threats. Additionally, it announced on Jan. 19  a new SEK 4.3 billion (approximately $400 million USD) military “heavy advanced weapons” aid package to Ukraine featuring Archer 155 mm artillery system, up to 50 CV90 infantry fighting vehicles, recoilless rifles and NLAW anti tank weapons.

Sweden faces delay to entering NATO due to an objection by Turkey on grounds that it provides safe refuge to PKK members and an alleged failure to extradite Turkish nationals who Ankara wishes to prosecute. Relations between the two were made worse when Rasmus Paludan, a far-right Danish politician with Swedish citizenship, set fire to a copy of the Qur’an outside a Turkish Embassy in Stockholm on Saturday.

The official at the conference today confirmed that NATO requirements will include Sweden having to put forward two brigades for future deployments and offer “some sort of expeditionary capacity.” Sweden will not abandon Army conscription should NATO entry happen, said the official, but as an immediate priority will move to increase readiness.

Outside of how the application process unfolds and how operational considerations might change to suit alliance requirements, significant Swedish Army unit and acquisition changes are underway, led by a government requirement to have at a minimum, four mechanized brigades, purchase two new versions of the CV90 infantry fighting vehicle and upgrade six existing variants, according to the official.

He warned however that the main “problem” of procurement arises from the fact that items like tanks are 20 to 30 years old, a timeframe, he added, where the fighter jet era approaches sixth generation designs.

Advanced land warfare capabilities are being worked on, with the official mentioning collaboration with France to assess an antitank beyond line-of-sight solution, capable of striking targets up to four kilometers. The two countries agreed in June 2021 to partner on development of an antitank weapon based on MBDA’s Missile Moyenne Portée (Medium-Range Missile/MMP) design.

Eventually, “that [antitank capability] will be a totally new role of the Swedish infantry on the battlefield,” added the official. “Old kit will have to stay relevant as we prepare to buy new kit.”

“We are already in the initial phase [of the CV90 procurement process] but for the future new infantry vehicles and those to be upgraded have to provide not only low tactical level multidomain platform, but also on the higher end,” he said.

CV90 manufacturer BAE Systems announced in November 2022 that it was launching development of the new two Swedish variants — one for combat support and the other for forward deployed vehicle maintenance.

In a bid to ensure acquisitions run effectively, a so called “Swedish model” has been developed that relies on “close collaboration” between national military suppliers and the Swedish armed forces. Such an approach was previously successful in delivering the CV90 mortar system and which offers an indirect firepower capability, started with six operational requirements, old mortars sourced by the government. The effort was  delivered in “record time,” according to the official.

Sweden’s array of military partnerships with Scandinavian neighbor Finland has also led to mutual benefits based on a “cross use, cross develop and security of trust” strategy.

“If the worst comes, its good to have the exact same equipment [with a neighbor], not just interoperable equipment,” the official said.