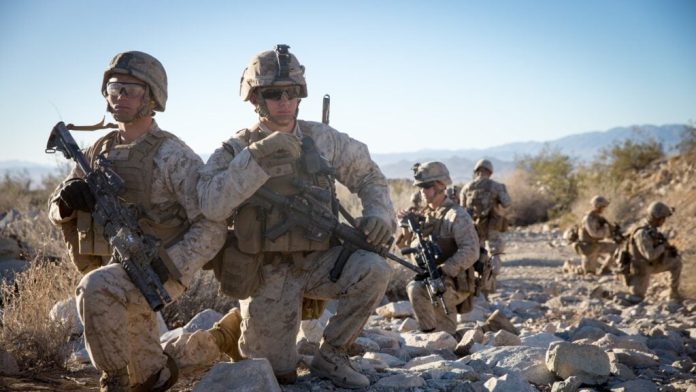 WASHINGTON — The Marine Corps today took the latest step in its Force Design 2030 efforts, initiating a wide range of assessments and overhauls that are all aimed at revamping how the service produces Marines. Russia’s war in Ukraine, senior officials say, have “confirmed” the direction the new document sets for the Marine Corps.

“Current events, I would say, were more confirming that we know that this is what’s necessary,” Sgt. Maj. Stephen Griffin, the senior enlisted at the service’s Training and Education Command, told reporters today at the Pentagon. “That we need a cognitively agile [non-commissioned officer] that can outmaneuver our enemies in the future. It’s just more confirmation.”

The document itself, titled “Training and Education 2030,” is roughly 24 pages long, signed out by Commandant Gen. David Berger, and goes through nearly every element required to produce a United States Marine, from selecting a military occupational specialty and the technology used in the classroom to hosting large-scale exercises and honing marksmanship, a skill the service prides itself on teaching every Marine.

Each section concludes with specific tasks Berger is ordering Training and Education Command, also called TECOM, to undergo. There’s a little more than two dozens tasks, all of which have timelines to be completed no later than sometime in 2025, and they collectively amount to reevaluating every aspect of how Marines train and learn, and whether that way is still the best.

As the TECOM chief, Lt. Gen. Kevin Iiams is the officer primarily responsible for ensuring the tasks are done. While speaking to reporters alongside the sergeant major today, he said one of the structural changes the document solidifies is that his role will now be “dual-hatted” as both the commanding general of TECOM and an associated deputy commandant position. Internal changes like that reflect the importance of the command to the Marine Corps and in the eyes of the current commandant.

Iiams said in total the Marine Corps is now moving away from the “rote, repetitive training” the service once relied upon.

“We want cognitive, problem-solving thinkers for the future. So our [professional military education] programs are going to talk about how we build young Marines into being able to do that, knowing that they are going to be some of the folks who make the critical decisions in the battlefield,” he said.

When asked about potential critics — something that Berger and Force Design 2030 has attracted in groves during his tenure as the senior Marine Corps officer — Iiams called the process of making a Marine “sacred” and said that process “fundamentally is not going to change.”

“Modernization, new technology. Can we make it better? Absolutely,” he said. “How do we use these new tech and capabilities to do it faster [and] to do it better?”

As Russia’s war in Ukraine approaches the one year mark, a consistent commentary by military observers has been a lack of strong NCO corps in the Russian army. By contrast, producing NCOs is a point of pride for all the US service branches, and in particular, the Marine Corps. (On a panel of six senior Marine officials who spoke to reporters today, nearly all of them were keen to reinforce that point when asked about it.)

“I think a lot of what you have seen in Ukraine is — here’s a force who is very well equipped, but not very well-trained,” said Iiams, referring to Russia. “The strength of our Marine Corps against our peer-level adversaries is going to be that thinking, well-trained Marine that we’re going to provide for the future.”

Although the new document’s publication was prompted by a variety of other factors and initiatives unrelated to the past year in Ukraine, Anthony Greco, TECOM’s executive director, hinted that current events always play a part in force development efforts such as “Training and Education 2030.”

“You can’t provide realistic training without understanding the threat and ensuring that that’s an element of the calculus that you make with regards to providing that training,” he said.

Col. Mark Smith, director of the range training programs division at TECOM, in responding to the same question put it even more succinctly.

“Our NCOs aren’t going to show up [on a battlefield] and ask: ‘Why are we here’?” he said.

Is Russia’s Nuclear About-Face More or Less Credible Than Its Earlier Threats?