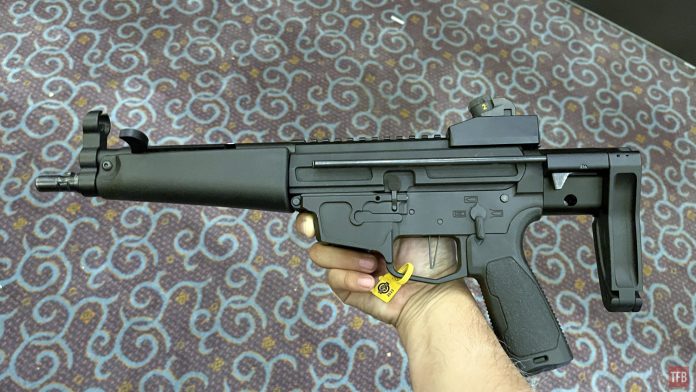 The feature that makes or breaks an MP5 style AR9 is how the manufacturer handles the charging handle. As you can see in the image above, the AR-MP9 has an MP5-style charging handle with the iconic locking cocking tube. The barrel is 8.3″ long and their cocking tube assembly is attached to the barrel. This allows them to use any compatible MP5 handguard. The barrel will be threaded 1/2×28 but it will come with a tri lug adapter. As you can see above, the cocking tube has the iconic circle hood front sight. At the rear, they have an MP5-style rear diopter sitting on a large block. This block is used to close off the rear section of the AR9 upper receiver since it is not using a standard AR-15 charging handle. Dead Foot Arms is also coming out with an SD-style variant of the AR-MP9. The SD AR-9 has an aluminum handguard that mimics the aesthetics of the iconic MP5-SD. Unlike the MP5-SD, the SD AR-9 will not be integrally suppressed. Rather it will have a threaded barrel so you can partially tuck a 9mm pistol can. The SD AR-9 comes shipped with a faux can to protect the threads. Since the handguard is aluminum, they can machine M-LOK slots at the 6 o’clock position. TFB and TFBTV’s coverage of SHOT Show 2023 is proudly sponsored by 5.11 Tactical. Click here to check out their new products.

Why the Heck Is There a Chinese Police Station in NEW YORK?