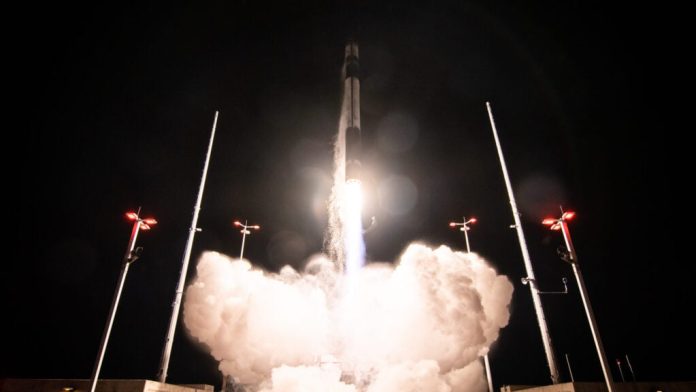 Electron lifts off from Launch Complex 2 at NASA’s Wallops Flight Facility at the Mid-Atlantic Regional Spaceport in Virginia Jan. 24. The mission was Rocket Lab’s first launch from US soil. (Image Credit – Brady Kenniston)

WASHINGTON — After two years of delay, caused by everything from licensing paperwork to bad weather, Rocket Lab on Tuesday evening finally celebrated the first launch of its Electron rocket from US soil — with a firm eye on expanding its manifest of Defense Department business.

Up to now, Rocket Lab based its launch operations in New Zealand, where the company was founded in 2006 — though it is now incorporated in the United States with a headquarters in California.

“This flight just doesn’t symbolize another launch pad for Rocket Lab. It’s a standing up of a new capability for the nation,” Rocket Lab’s CEO Peter Beck told reporters in a briefing on Dec. 14.

The “Virginia is for Launch Lovers” mission, lofted from the firm’s Launch Complex 2 at the Mid-Atlantic Regional Space Port on Wallops Island, Va., carried the three Hawkeye 360 radio-frequency geolocation satellites. The satellites are the sixth cluster of Hawkeye’s constellation in to low Earth orbit. The company in September was awarded one of six National Reconnaissance Office study contracts for RF geolocation remote sensing firms. Hawkeye 360 intends to launch 15 more birds with Electron between 2022 and 2024.

“Rocket Lab Launch Complex 2 is designed to serve the responsive space needs of commercial, civil, defense, and national security customers, supporting up to 12 missions per year,” the company said in a press release following the launch.

Rocket Lab’s launch facility, which is located within NASA’s Wallops Flight Facility, was opened in December 2019, and the firm originally had planned a first launch in 2020. The effort, however, was plagued by a series of delays. The latest problem as stormy weather, which pushed the previously scheduled Dec. 16 flight until Tuesday.

Prior to that, the key stumbling block was a delay in certification of NASA’s Autonomous Flight Termination Unit (NAFTU). Once that was delivered last October, Rocket Lab then had to struggle with NASA and Federal Aviation Administration paperwork snafus.